Universally acknowledged as the most pleasing of all proportions, the Golden Ratio has been studied by mathematicians since ancient Greece. Artists throughout the ages- from Leonardo da Vinci to Salvador Dali- have utilized its elegant properties. The Golden Ratio or Golden Mean describes the relationship between the lengths of two line segments. Segments A and B below are said to be in the Golden Ratio because the length of A is to the length of B as the length of the whole line (A + B) is to A. 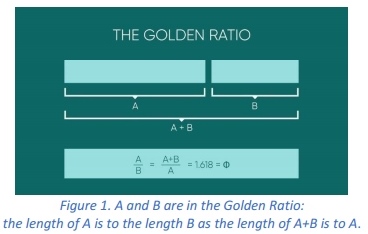 As indicated below, Masters organized “Winter Perch” around the Golden Ratio. The massive oak tree divides the picture into two unequal, but proportionate rectangles.  The lower main limbs then subdivide the left side into a square and another smaller rectangle. This orderly division of the picture plane provides structure for the jagged, haphazard smaller branches that flash across the sky like lightning. 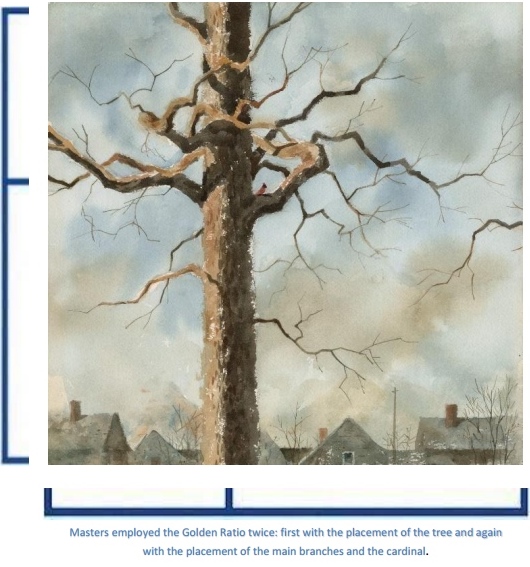 The alert cardinal, the true subject of the painting, brings the composition to life. Note its placement near the intersection of the extended lines, its importance accentuated by the encircling branches.

The row of buildings anchors the painting, and the complex rooflines lend further structure while answering the angularity of the branches. Sunshine breaks through the clouds, breathing further life into the picture while casting interesting shadows and warming the blues, browns and grays. The presence of the other leafless trees reassures us the mighty oak is not dead and that in a few months all will be green and alive again.

Masters’ widow, Carlene, revealed “Winter Perch” (not the artist’s title) depicts the view from their living room window. The tree stands in the front lawn with the houses directly across the street. It’s difficult to know what Masters thought of this painting. There are no others like it in his oeuvre. Masters was frugal and if he didn’t like a painting, he usually worked the other side of the paper, which is not the case here. It was not found with his body of work, which came to light shortly after his death in 2005. Rather, Carlene found it several years later, tucked away on a shelf in the garage.

Giclee prints from under $30 available at Fine Art America HERE.

$45 flat rate for shipping and packaging within the contiguous 48 states. Please contact us prior to purchase for shipping quotes to Alaska, Hawaii, and international destinations.

Contact Robert Morrissey with any questions about this piece.