Stan Masters often joked that he wasn’t from the other side of the tracks; he was from between the tracks. Born on the 4th of July in 1922, this uniquely American artist was the son and grandson of railroad workers. He was raised in the Missouri Pacific Railroad Section House in Kirkwood, a one-room building at the confluence of tracks where the trains passed within six feet of the porch. There was no running water, nor electricity.

Yet at an early age he knew he wanted to be an artist. As a teenager he drew a cartoon of himself as a precocious baby in diapers drawing stick figures on the wall. The caption: “Someday I’m going to be a famous artist!” 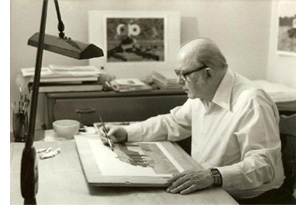 Masters was inducted into the Army in 1942, sent to Pennsylvania to guard bridges and coal mines. There he met Carlene Fiester, his future wife. He saw combat action in Italy from 1944-45 and was honorably discharged in 1946. Upon his return to St. Louis, he applied to and was rejected by the local art schools on the grounds of having no portfolio. He attended the Dauphin School of Fine Arts in Philadelphia on the GI Bill in 1946. One of his professors owned an ad agency in Wilmington, Delaware and, recognizing Stan’s talents, promptly hired. He and Fiester married in 1947.

They returned to St. Louis in 1948 where Stan spent the next 20 years in the commercial art industry. He worked as an art director at various advertising agencies and was involved in layout and design. He won industry awards from such groups as the Art Director’s Club. In 1962 he made a short film called The Storm, which won five awards from The Photographic Society of America, the most awards given to a film in 33 years. It also won at the Cannes Film Festival in the Amateur Division in 1963.

By 1970 Masters decided to devote his career entirely to his art. He began studying in earnest, especially the works of Winslow Homer, Andrew Wyeth, and Edward Hopper. His library also contained a small book on the 18th century French artist, Jean-Baptiste Chardin. Initially working in acrylic and experimenting with various styles, he soon discovered watercolor. It was in this medium that Masters found his voice. In 1971, he wrote a note on a 3-by-5-inch index card declaring, “My God! I think I may have done it-painted a ‘professional’ picture! I’d found my ‘subject.’ Now I may have found my medium.”

Masters entered and won numerous competitions locally and nationally. He had his only one-man show at the William Engel Gallery in Webster Groves, Mo., in 1978. Despite glowing reviews in the St. Louis Globe-Democrat and The Arts, a monthly newspaper, sales were minimal. He exhibited twice at the St. Louis Artists’ Guild, and despite winning a cash award in 1982, he never sold a painting there. Discouraged by his lack of commercial success, Masters withdrew to his studio for the remainder of his career, which ended with a stroke in 1994. He died in 2005, having sold, on average, less than four paintings a year.

In July 2006, Robert N. Morrissey, proprietor of Robert Morrissey Antiques, discovered Master’s watercolors. He held an exhibition at his Clayton gallery in September/October of that year- Masters’ first solo exhibition in nearly 30 years. This time, over 30% of the works sold.

Read the review from The Arts, October 1978